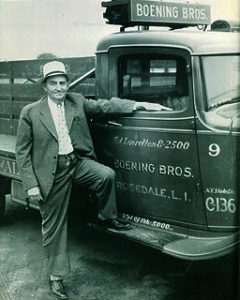 In 1901, Phillip Boening was a dairy farmer in Rosedale, Queens. Each week Phillip would make a trip to Brooklyn to visit the many

breweries there to buy their spent grain to use as feed for his livestock. His neighbors would often ask him to pick up beer and bring it back for them. It wasn't long before Phillip realized that it was more profitable to pick up and deliver beer than it was to be a farmer. Initially his fledgling business was no more than a one-man horse and wagon operation. From this humble beginning evolved a large, independent family owned beer and wine distribution company which includes a sister company, Oak Beverages, in Blauvelt, NY.

Today, the combined companies have over 70 delivery trucks, 6 warehouses, and 350 employees. Between Boening Brothers and Oak Beverages, they service the 5 boroughs of New York City, all of Long Island, Westchester, Putnam, Dutchess, Rockland, Sullivan, Orange, and Ulster Counties. Boening Brothers and Oak Beverages have recently added Wines and Liquors to its portfolio of available beverages. 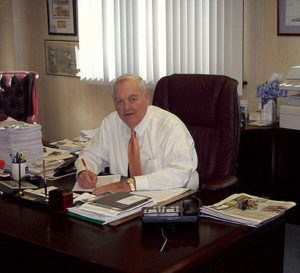 The original location of Boening Brothers Distributors was on the Boening farm in Rosedale. Today Boening Brothers is located in North Lindenhurst, Long Island. Phillip Boening's son, Harry took over the business in 1930. Phillip Jr. later joined his brother. They were able to survive Prohibition by selling soda and "near beer" and became the first company to introduce Pepsi-Cola to Long Island. After the repeal of Prohibition, Boening Brothers was ready with a fleet of 10 trucks and were granted one of the first wholesale licenses issued by New York State. 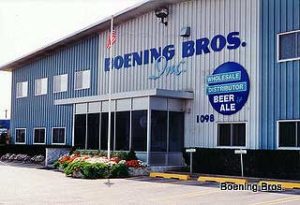