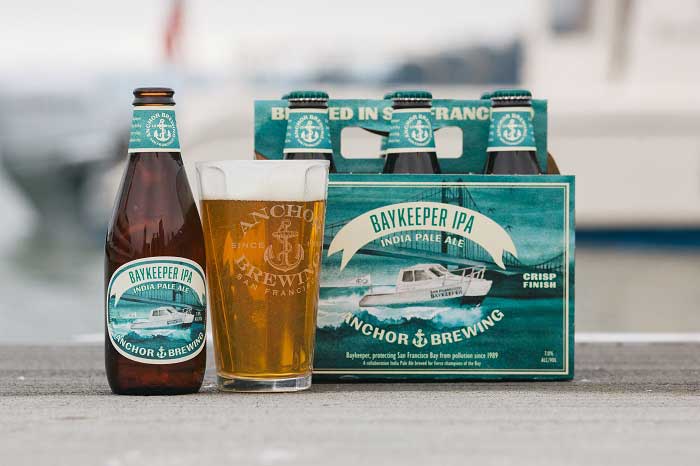 San Francisco born and raised, Anchor is lucky to be surrounded by the San Francisco Bay, one of the world’s most impressive waterways and one of California’s most important ecosystems. That’s why we partnered with local nonprofit Baykeeper to create Baykeeper IPA, a bright and delicious IPA brew. Baykeeper, who has defended the Bay from pollution for 30 years, relentlessly confronts polluters and stops harmful actions from occurring in the Bay with their expertise in law, science, and advocacy.

To celebrate their accomplishments and 30th anniversary, we’re introducing a collaboration beer that’s as fierce as Baykeeper’s commitment to preserving the Bay. Baykeeper IPA is a crisp and refreshing San Francisco-style IPA, overflowing with juicy and fruit-forward hop layers. A portion of the proceeds from this brew will directly support San Francisco Baykeeper and their efforts to stop polluters so the Bay’s water is healthy for wildlife and local communities.

“There’s nothing like a crisp beer to celebrate a good swim, boat ride or kayaking session,”

The recipe for Baykeeper IPA was inspired by the feeling of being out on the water: salty skin, clean air, and a bountiful breeze. “There’s nothing like a crisp beer to celebrate a good swim, boat ride or kayaking session,” said Brewmaster Scott Ungermann. “The San Francisco Bay is intrinsically tied to Anchor, which earned its name because of the historical maritime influence on the city. A temperate climate and cool breeze from the San Francisco Bay have affected the way Anchor has produced beer since 1896.”

“Anchor Brewing, like the Bay itself, is iconic to San Francisco,” says Sejal Choksi-Chugh, Executive Director of San Francisco Baykeeper. “They know that a healthy Bay is part of what makes the Bay Area special. The Baykeeper IPA is a meaningful pairing for anyone who loves San Francisco Bay and is looking to support a terrific local company.”

Teeming with lime, orange zest, and papaya aromas, Baykeeper IPA has a slightly spicy, yet slightly sweet taste that finishes with a delicate bitterness. Mosaic, Cascade, and Amarillo Cryo hops were used to amplify the fruity and piney hop aromatics in this slightly hazy brew. Anchor takes a balanced approach to the bitterness while ramping up the hop intensity in Baykeeper IPA, making it a tasty San Francisco-style IPA.

Because this brew is a celebration of the Bay, we turned… full article