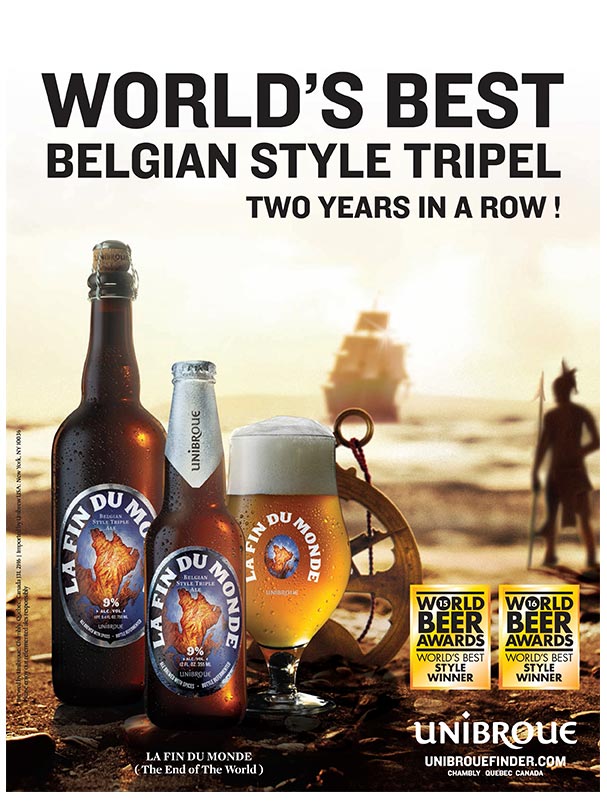 To date, it has won 55 medals and honors from top international competitions, including 13 platinum distinctions and 29 golds at prestigious events such as the Chicago Beverage Testing Institute’s World Beer Championships and the World Beer Awards.

“La Fin du Monde is our flagship brand” says Jerry Vietz, Brewmaster for Unibroue. “With this beer alone, we have won 55 international medals, including 2 prestigious awards at the World Beer Awards in London, England, where it received the title of ‘World’s Best Belgian Style Tripel.’”

Every sip greets the palate with a harmonious mélange of coriander, candied orange peel, lemon, black pepper and bananas, framed by a subtly spicy hop backbone and alcohol warmth. Truly a perfect balance of sugar, acidity, bitterness, spice and alcohol.

Like good wine, La Fin du Monde’s flavors develop with age, becoming smoother over time, revealing notes of honey and candied fruit and developing a more assertive and lasting flavor. This phenomenon is known as “maderization” and is similar to the aging process of dessert wines like port.

To age, store bottles upright in a cool dark place at a stable temperature between 46°F and 61°F. The yeast added to each La Fin du Monde bottle triggers natural fermentation, consuming excess oxygen and preventing the beer’s CO2 from oxidizing. This bottle fermentation combined with the higher alcohol content in La Fin du Monde act as natural preservatives, ensuring you can enjoy it for years to come.

The award-winning La Fin du Monde, Unibroue’s flagship ale, is available year-round in the U.S. in 4-packs of 12-ounce bottles, 750-mL cork and cage ‘‘brasseur’’ bottles, as well as on tap. Use the Unibroue Finder tool to find this and other Unibroue beers that are available near you.

Unibroue is headquartered in Quebec, Canada. From the very beginning, it has carved out a special niche in the beer world with top-quality products and a brand rooted deep in Quebec culture. It made history by becoming the first North American brewer to use a brewing method inspired by the two-centuries-old tradition developed by Trappist monks in Europe – particularly Belgium. Over the years, Unibroue has remained faithful to its origins even as it has grown to become an icon of the brewing world. Unibroue products take you on a journey filled with legends and fabulous tales.

From the very beginning, we have carved out a special niche in the beer world with top quality products and a brand rooted deep in Quebec culture. It made history by becoming the first North American beer maker to use a brewing method inspired by the two-centuries-old tradition developed by Trappist monks in Europe—particularly in Belgium. Over the years, we have remained faithful to our origins even as we have grown to become an icon of the brewing world. Our products take you on a journey filled with legends and fabulous tales.
At Unibroue, we create unique-tasting craft beers using traditional brewing methods.

To craft our beers, we draw inspiration from the great brewing traditions developed over the last two centuries by Trappist monks in Europe—particularly in Belgium. Our beers preserve all their protein and part of their yeast, making them truly worth savoring.

THE ART OF BREWING

Our beers are unlike any other product on the market, and no two are alike. Discover our unique brewing methods which convey our beers’ peculiar character and personality.